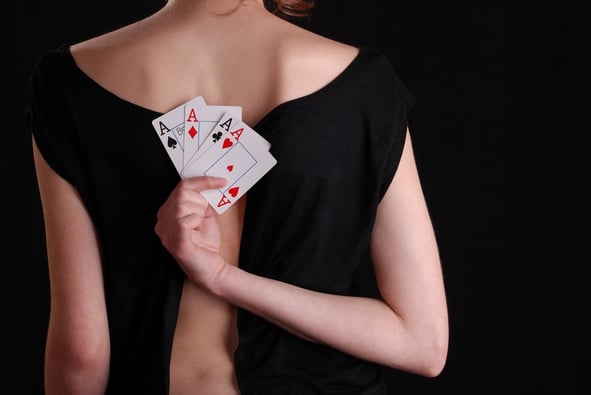 You might think that the biggest gamblers in the world are in China, Japan, or Italy—but it’s the United States that loses the most when it comes to gambling.

In 2013, U.S. gamblers lost a staggering $119 billion: more than the net worth of Bill Gates and Warren Buffet combined. Whether playing slot machines, roulette, blackjack, or poker, it’s no secret that the odds are stacked—but U.S. players aren’t letting that common knowledge keep them out of the game.

There’s no doubt that gambling is big business for U.S. casinos. And where there’s big business, there are bound to be thieves. Casino cheating expert George Joseph of Worldwide Casino Consulting estimates that the industry loses tens of millions of dollars a year in cheating scams.

For those who figure out ingenious methods to deceive the house, the rewards can be hefty. And thanks to increased security technology and investigation software, it’s getting harder and harder to pull off.

Whether using age-old sleight of hand, or the aid of high-tech devices, these four ambitious cheaters have managed to successfully hustle casinos for millions. Here are some of the top clever casino scams that actually worked.

It sounds like something straight out of Ocean’s 11, but in 2011, three Italians truly did rob the house by wearing specialty contact lenses. The trio bribed an employee of the casino to mark the backs of certain playing cards—Kings and Aces—with crosses and slashes, and then used the specialty contacts to spot the “invisible” ink.

The team won €70,000 on their first night, but security became suspicious after detailed examination of the game showed that members were folding starting hands which would only be discarded if the holder had prior knowledge of the dealer’s cards.

When the gang's ringleader returned to the casino two months later, he was arrested soon after winning a further €21,000 at the poker tables. Although the judge was reportedly impressed by the group’s methods, it didn’t save them from a €100,000 fine each and varying prison time.

In 1973, a French roulette dealer, his sister, and his brother-in-law took another French casino, the Casino Deaville, for $1 million with a remote-controlled roulette ball.

Hidden within the ball was a tiny radio receiver, and the radio transmitter that controlled it was concealed within a pack of cigarettes. The dealer planted the ball, his brother-in-law placed the bets, and his sister discreetly steered the ball in the right direction, guiding it until it stopped on the better's chosen number.

The group might have never been caught, if not for the unfortunate fact that the casino’s owner was infatuated with the sister. After some time, he noticed that she always sat at the same table and always made very low bets without winning anything.

As a result of his suspicions—coupled with the group’s growing winning spree—the casino owner called a debugging crew to sweep the area, and the radio roulette ball was discovered. A French film was made about this event, entitled Tricheurs or “cheaters”.

Louis “The Coin” Collavecchio, the self-described “world’s greatest counterfeiter”, was a master mechanic, jeweler, and imported car dealer who turned his skills towards crime.

For years, he made near-perfect replicas of slot machine tokens that confounded—and impressed—casino operators in multiple jurisdictions. In interviews, Collavecchio refused to refer to his perfectly replicated tokens as “fakes,” instead preferring the term “high quality replicas.”

Casinos only figured out that they were being deceived after discovering surplus slot machine tokens in their vaults.

Collavecchio was eventually caught and sentenced to more than six years in federal prison for his handiwork. However, the U.S. government also paid him $18,000 in consultant fees to explain how his manufacturing dies outlasted those at the U.S. Mint.

If this story seems familiar, it may be because the History Channel has made a documentary about Colavecchio called Breaking Vegas. Thanks to players like him, many casinos now use special paper vouchers instead of tokens when players are ready to cash out.

In 2011, a group of men known as “The Cutter Gang” cheated their way to millions at the baccarat table by using a tiny camera hidden in one player’s cufflink. In baccarat, it's a standard practice for the dealer to allow players the opportunity to cut the deck after it has been shuffled.

To pull off this trick, one of the gang members accepted the offer, and used the opportunity to drag the cut card over the top of the deck, slightly separating the cards with his index finger as he did so. The camera in the player’s sleeve recorded the card sequence.

Then, it is believed that the player excused himself to use the restroom, where he passed the camera to an accomplice in an adjacent stall.

The runner brought the camera to a headquarters in a nearby hotel, where game analysts advised him through an earpiece on the optimum way to win.

The group was detained at the Cosmopolitan, but could not be arrested. Law enforcement officers require probable cause to conduct a body search for a cheating device concealed beneath clothing, and it wasn’t obvious enough to a casual observer that a camera was being used during play.

The group was later arrested in the Philippines, but escaped and have been missing ever since.

How investigation Software can Help Casinos

A well-organized scheme like those above can pawn off millions, so to casino owners, an amped-up security system is worth the investment.

Scout’s case software was developed by leaders in several areas of investigation, and many national insurance carriers, corporations, government entities trust it to securely act as the backbone of their operations.

To learn more about how case investigation software can help your casino stop cheaters, click here.